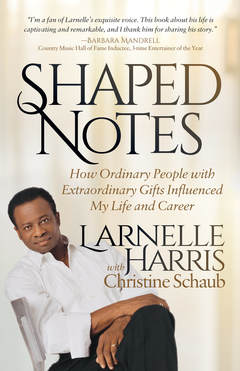 Larnelle just released his first memoir entitled "Shaped Notes: How Ordinary People with Extraordinary Gifts Influenced my Life and Career."  Co-written with critically-acclaimed author, Christine Schaub who wrote the best-selling Music of the Heart series, "Shaped Notes" may surprise some of Larnelle's long-time fans. Check out more about the brand-new book by clicking this link.

"The book not only conveys the extraordinary life of this grace-filled man, it inspires others to reach beyond circumstance, prejudice, boundary—perceived or real—and become living examples of God’s perfect melody He sings through us all."  -- CCM Magazine

“I'm a fan of Larnelle's exquisite voice. He has been abundantly blessed by God with an enormous amount of talent. This book, he has written about his life, is captivating and remarkable, and I thank him for sharing his story.” -- Barbara Mandrell, Country Music Hall of Fame Inductee, 3-time Entertainer of the Year

​“We throw around words like ‘integrity,’ ‘the real deal,’ ‘what you see is what you get,’ and ‘family values.’ Use all of those, and throw in ‘a world class talent’ and you have Larnelle Harris. What an artist! What a genuine spirit! What a class act!” -- Bill Gaither, ASCAP Songwriter of the Century, Gospel Music Hall of Fame Inductee

Larnelle featured at the opening of Dollywood

These are just a few of the rave reviews Larnelle's new song, "Disturb Us, Lord," is getting from radio stations across the country. Watch the music video of the song below. The new CD and song are available in the Store section.​ 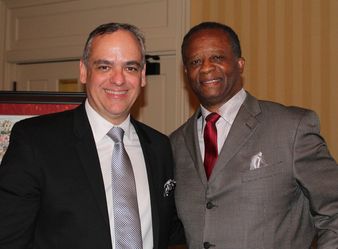 Larnelle Harris was named Orchestra Kentucky’s 2017 recipient of the Lifetime Achievement Award in the Arts and Humanities.  Harris joins a distinguished list of performers and singers such as award-winning singer/songwriter Neil Sedaka, Peter Tork of the Monkees, and Grammy, Golden Globe and Academy Award winner, Paul Williams. Find out why Orchestra Kentucky director, Jeff Reed (pictured with Larnelle), said Harris was the perfect choice for the honor by clicking these media links:

Over half a million views and counting!!

Larnelle honored by National Convention of Gospel Choirs and Choruses 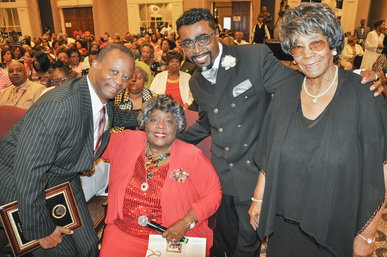 (Pictured L to R: Larnelle Harris: Dr. Marabeth E. Gentry, NCGCC National President; Rev. Dr. Derrick E. Roberts, NCGCC Chairman of the Board; Dr. Bessie M. Palmer, 2nd Vice President and Host President)
Larnelle Harris was honored with a Heritage Award from the National Convention of Gospel Choirs and Choruses (NCGCC) at their 83rd annual convention in Harris’ hometown of Louisville, Kentucky.  Harris says it was a humbling experience.
​
“The NCGCC has a long and storied history,” said Harris. “I was most grateful for the recognition, and privileged to be part of their event.”

The NCGCC was founded by Professor Thomas A. Dorsey, who is affectionately known as the Father of Gospel Music. The first Gospel choral union was organized in Chicago in 1932, and Dorsey was elected president. On August 30, 1933, at the Pilgrim Baptist Church in Chicago, the National Convention of Gospel Choirs and Choruses was organized and held its first session. Every feature of the annual National Convention of Gospel Choirs and Choruses was designed for the betterment of the Christian singer, instrumentalist, educator or leader; geared toward enabling the prepared Gospel ambassador; and purposed for the individual to be spiritually motivated to live the message of the Gospel song. Today, led by its President, Dr. Marabeth E. Gentry, and Rev. Dr. Derrick E. Roberts, Chairman of the Board. the NCGCC continues to expand the reach of Gospel music. Visit www.NCGCCInc.com for more information. 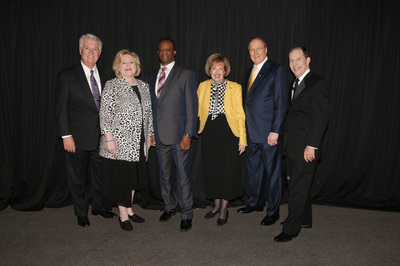 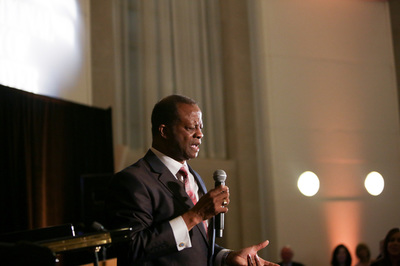 Larnelle was part of the historic CCM United Concert and  Twitter fans from across the nation made their opinions known about Larnelle's performance:

Most moving of the night came with @SandiPattyP and Larnelle Harris. Wept & worshiped.

In the spirit of having church, I'm throwing my shoe at Larnelle Harris for vocals beyond perfection!

@SandiPattyP and Larnelle Harris had the crowd on their feet with "I've Just Seen Jesus"! #CCMUnited

Larnelle Harris takes us all to school and back.

Larnelle and Sandi still have some pipes!

For the record...LARNELLE still HAS it!

Larnelle Harris - just brought the house to their feet!!

Larnelle was honored with the Kentucky Governor's Lifetime Achievement Award in the Arts at the Capital building in Frankfort, KY.   ﻿The prestigious award is given to Kentuckians who have made significant contributions to the arts in the Commonwealth, across the country, and around the globe. Harris will be the first Christian vocalist to receive the Artist Award since its inception 29 years ago. The awards ceremony will be broadcast on the KET network during the month of November. Click on the articles about the award below:﻿ 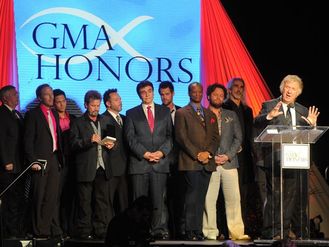 Larnelle received his fourth Hall of Fame induction as both current and former members of the Gaither Vocal Band were recognized at the 2014 GMA Honors ceremony.  A video presentation highlighted the history of the GVB, which has delighted fans for more than 32 years to date, has recorded more than 400 beloved songs, received 17 GMA Dove Awards and two Grammy awards. See full story here.