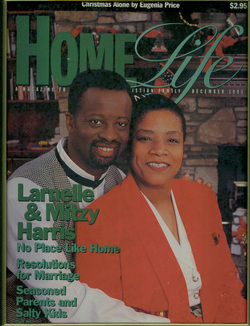 1. How and where did you meet your wife Mitzy?

December is a big month for Mitzy and I. It is the month of our anniversary. And thus far we've celebrated over 44 years. We met as undergraduates at Western Kentucky University. She was an Elementary Education major and I a voice major. We had a fairly rocky dating life but after the dust settled the rest is history

2. How many children do you have?

We have two young adults in our lives. Our son Larnelle Jr. (Lonnie) and our daughter, Teresa.

3. Tell us about your first concert?

I did my first concert in my hometown Danville, KY when I was very young. I was probably nine or ten years of age. I'll never forget that concert. Miss Georgia Donehy played piano and put the concert together. Now you don't know Miss Georgia but every young person in Danville knew her. She taught piano lessons to every kid in town. I hope every town has a Miss Georgia.

It wasn't easy getting me to sing because of being a classified boy soprano. When I'd sing the hymns the ladies in the church would just cry, but my peers would just laugh and throw things. I've long since realized however, that something special happened to me in that concert. I'm really not sure if anyone else knew about it. My parents probably did. Parents seem to be sensitive to such events in the lives of their children. God used that night as a preview of how I was to serve Him. I didn't see it all clearly at that time and didn't until years later. But that night I knew somehow He wanted me to use what was in my hands, music, to tell others about His Love.

4. Has there been a difficult time in your life that you can talk about?

Mitzy and I spent a great deal of time during that year praying and seeking God for some answers. I was traveling with a Christian organization. I was part of a team that led many people to Christ when the vocal challenges came. And the questions were there. You know what they are. You've had them. The most baffling question was why is God doing this to me?

Well, I found out that God wasn't doing anything to me except, of course, standing with me just as He promised. And when I got through that feel sorrow for me stage He gave me a great revelation.  I was finally able to say, "God, if you are going to allow my voice to be taken then, you must have something awfully good coming." When I got to that point in my prayer life, seemingly I had been led to a most important place in my Christian life. I was learning to trust my heavenly Father.

Mitzy and I were married a couple of years earlier and had been on the road for most of our young married life. She and I had decided that it was time to add to our family and had made plans to buy our first home and slow life down a little. Picture it, we had just placed ourselves in more debt than we'd ever experienced and now I could not sing a note. Mitzy and I met at WKU where she had taken her bachelors degree in Special Education. So at least one of us had a job.

For two kids fresh out of college facing what we faced was difficult. We relied on the fact that God loved us and was not going to leave us. We had little else. Our house payment at that time was just a few dollars a month, but it seemed like more than we could handle. How amazed we were that we never missed a payment! God showed up just in time, right on time each month.  God was showing us that He was able to work in our lives.

5. What is one of the funniest things that has happened to you?

One year I was nominated for two Grammy awards, but was unable to attend the event because of being on tour. I won both awards. One of the awards I shared with my good friend Sandi Patty and the other was for one of my solo recordings. Because I was unable to go, my wife Mitzy had a get-together at our home that included a few friends and family. It was a special time for all of us.

I've often wondered if the rest of you husbands get those honey-do notes from your wives. My list is always placed on the kitchen table where it simply cannot be missed. Though there have been times...

After the Grammy party the night before, I was a surprised that Mitzy had left THE LIST. There were a number of to-do's on it, but the most noticeable was to take out the garbage. I was dumbfounded. But I knew that unless I wanted to sleep on the sofa until our next anniversary, I had to get it done. I was literally throwing away newspapers in which I was pictured holding, you guessed it, GRAMMY awards. God has a great sense of humor doesn't He?

6. Have you ever had voice problems?

I was voice major at Western Kentucky University and have spent countless hours singing everything from rhythm and blues to the classics and all without much vocal difficulty. However, in the early 70's while traveling with a road group, I developed some problems. In fact, I had the formation of a small mass of tissue on my vocal chords called nodules. I traveled all over the country seeing various ear, nose and throat specialist to have the diagnosis verified and it was. I was subsequently place on an extended vocal rest. I communicated during that time with pencils and yellow pads.